In a joint scientific study, researchers from Blood Lions and World Animal Protection reviewed over 90 scientific papers and identified many welfare challenges faced by lions held in captivity worldwide, which also applies to South Africa’s commercial captive predator industry and its tourism spin-off activities. With 8,000 – 10,000 lions in captivity in South Africa, no national welfare norms and standards, and a lack of scientific studies on welfare in the industry, no one knows the full extent of the welfare issues being dealt with. Explore our research findings below to learn about the many reasons why we need to #CancelCaptivity.

We need YOUR support

We are asking the public to help us urge the South African Government to finally prioritize the welfare and well-being of captive lions.

We urge Minister Creecy (Environment) and Minister Didiza (Agriculture) to keep the pressure on and stick to the promises they have made.

Sign this Petition to support our Open Letter addressed to South African Ministers Creecy and Didiza.

Currently, South Africa has no national norms and standards for breeding and keeping captive lions. This puts thousands of lions and other big cats at risk of a wide range of physical and mental welfare challenges.

By supporting captive wildlife tourist facilities that offer interactions with their captive predators, YOU are contributing to the commercial exploitation and existing welfare challenges of these animals.

All of the papers we reviewed focused on captive lions in tourist facilities like zoos, wildlife parks and sanctuaries around the world; but none of them studied the welfare of lions on commercial facilities in South Africa, where lions are likely to face many more welfare challenges than in any other captive environment.

Our researchers found that, of the 170 conditions found: 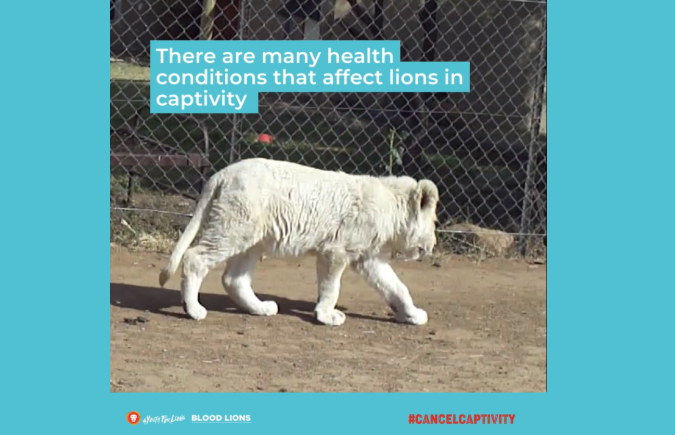 Over 70% of the welfare conditions identified by our researchers related to the physical health of lions in captivity, where lions are affected by serious diseases and injuries.

Many diseases are linked to inbreeding, a lack of food or being given the wrong food that doesn’t provide the lions with the correct vitamins and minerals they need.

These health conditions are just part of the reason why we should #CancelCaptivity.

What is wrong with this picture of a lion born into the commercial captive predator industry in South Africa?

If you said that they likely suffer from Mange, then you are right. Mange is a highly contagious and very painful skin disease caused by parasitic mites that makes the animals extremely itchy, causes them to lose their fur and can even crack their skin which can then get infected.

These types of parasitic infections are just some examples of avoidable health conditions that can affect lions in captivity, according to our research. 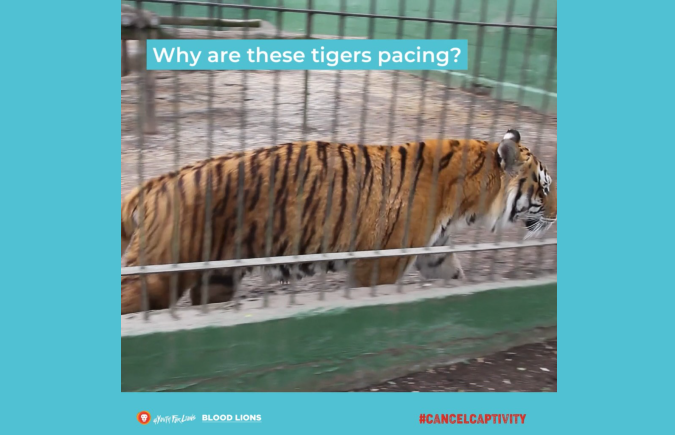 Have you ever seen a wild animal pacing up and down literally like a caged animal?

This is just one example of completely abnormal and negative behaviour for a big cat. They will generally only do this when they are feeling anxious, stressed and/or irritated.

Our research identified many negative behaviours that lions kept in captivity can display, such as abnormal pacing, self-harm and abnormal aggression. Being in direct contact with humans, being trained to do tricks and behave unnaturally, as well as being kept in unnaturally small environments causes immense stress for big cats like lions and can cause them to behave differently to how they should.

These negative behaviours are another reason why we should #CancelCaptivity. 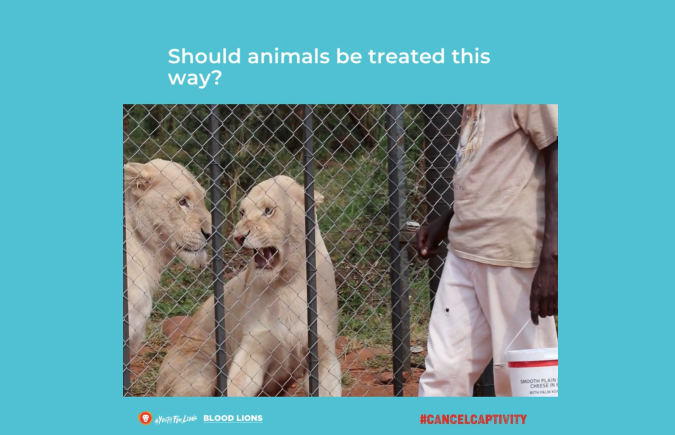 How do you think you would feel if you were treated this way?

Actions by people, like what you see in this video, may cause negative experiences like chronic stress, anxiety, irritation, frustration and fear in captive lions.

Antagonising any captive animal to attack, cornering them against a wall or fence, and even keeping predator and prey species in adjacent enclosures can cause mental stress that in turn can lead to abnormal behaviour.

These negative mental experiences are another reason why we should #CancelCaptivity.

How you can help:

Can you SPOT THE DIFFERENCE between these two cubs?

Lion cubs born into the commercial captive predator industry in South Africa are often removed from their mothers before they are weaned so that they can be hand-raised and bottle fed by paying tourists and volunteers. This creates huge welfare issues because the cubs are not getting the nutrients, vitamins and antibodies they need from their mother’s milk.

These nutritional challenges are a significant reason to #CancelCaptivity.

SPOT THE DIFFERENCE between these two lions

Malnutrition, emaciation, dehydration, anaemia and obesity are just some of the nutrition-related concerns found in captive lions, according to our research.

It is true that meeting the dietary requirements for lions in captivity is a significant management challenge and if not done correctly, can lead to nutrition-related concerns and even cause disease amongst the animal as their immune systems are often too weak to fight illnesses off effectively.

This is further evidence of the nutritional challenges that lions face in captivity in South Africa, just another reason to #CancelCaptivity and only #KeepItWild. 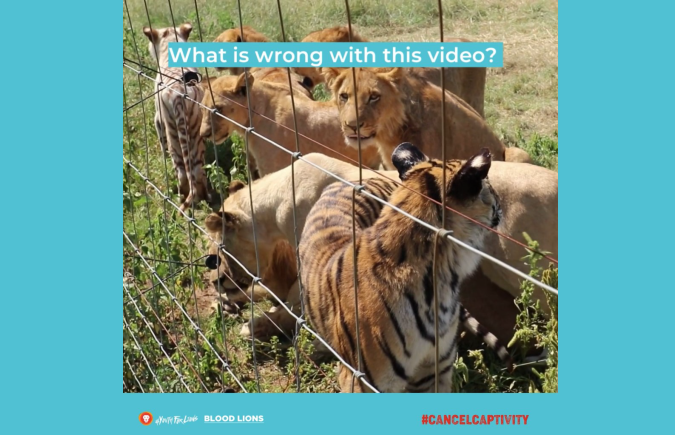 If you said that there are too many lions of the same age kept together and that tigers and lions should not be kept together, then you are correct.

An animal’s environment is extremely important for its health and welfare. Lions kept in the commercial captive predator industry are often housed in enclosures with too many animals, and with different species mixed together. This kind of abnormal environment causes them immense stress and negatively affects their mental and physical health, resulting in serious welfare challenges.

These are some of the environmental reasons why we should #CancelCaptivity.

An animal’s environment is extremely important for its health and welfare. Stress from the surrounding environment, space restrictions, lack of enrichment, and abnormal social groups are some of the environmental challenges faced by lions and other predators in captivity.

In the wild, a single lion’s territory can range between 4 and 3,000 km². In captivity in South Africa, the required size for a captive lion enclosure (according to the various provincial regulations) is a fraction of that size and can be as little as 0.00012 km² per lion.

This just shows us even more reasons why we need to #CancelCaptivity. 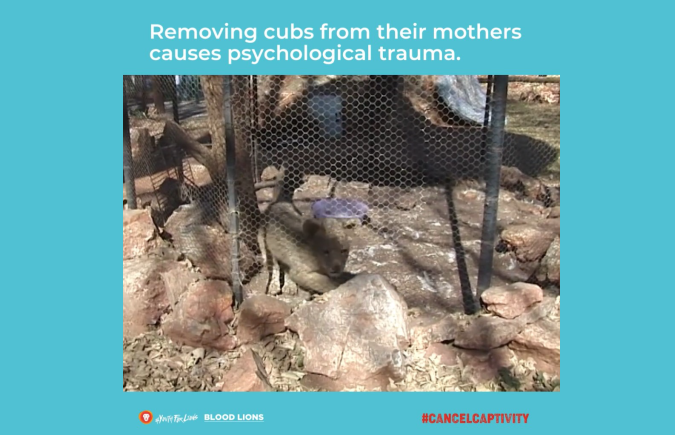 The commercial captive predator industry promotes the premature removal of cubs from their mothers, which results in a range of health conditions, and causes immense distress and psychological trauma for both the mothers and the cubs.

The cubs are removed so that they can be hand raised and bottle fed by paying tourists and volunteers. This also means that the lioness will be able to have another litter of cubs much quicker than she would in the wild. This will affect the animals’ health, mental state and nourishment, especially for the cubs.

So ask yourself: WHEN are we going to #CancelCaptivity?

Get South Africa to #CancelCaptivity

Lion cubs kept on commercial captive predator farms in South Africa are often kept in enclosures with animals of the same age, which means they have no adults to look up to or to learn from like they would in the wild.

Lions in particular need the social structure of a pride or family unit to help them develop and learn as they grow older. Keeping lions in captivity without a natural social structure will affect their mental state and may cause negative behaviours.

YOU can help us urge the South African Government to finally prioritize the welfare and well-being of our captive lions.

TAKE ACTION: Sign and Share the Petition to support our Open Letter to Ministers Creecy and Didiza.

This website uses cookies to improve your experience while you navigate through the website. Out of these, the cookies that are categorized as necessary are stored on your browser as they are essential for the working of basic functionalities of the website. We also use third-party cookies that help us analyze and understand how you use this website. These cookies will be stored in your browser only with your consent. You also have the option to opt-out of these cookies. But opting out of some of these cookies may affect your browsing experience.
Necessary Always Enabled
Necessary cookies are absolutely essential for the website to function properly. These cookies ensure basic functionalities and security features of the website, anonymously.
Functional
Functional cookies help to perform certain functionalities like sharing the content of the website on social media platforms, collect feedbacks, and other third-party features.
Performance
Performance cookies are used to understand and analyze the key performance indexes of the website which helps in delivering a better user experience for the visitors.
Analytics
Analytical cookies are used to understand how visitors interact with the website. These cookies help provide information on metrics the number of visitors, bounce rate, traffic source, etc.
Advertisement
Advertisement cookies are used to provide visitors with relevant ads and marketing campaigns. These cookies track visitors across websites and collect information to provide customized ads.
Others
Other uncategorized cookies are those that are being analyzed and have not been classified into a category as yet.
SAVE & ACCEPT